I haven't posted about SM in a while. The reason is that there weren't many issues. But after one year of  regular use and trying many implements, strenghth settings, and mounting trials, I have arrived at two basic set-ups for entertaining playing, even at increasing levels of  pain.

I have had one mechanical defect which had to be repaired by the vendor,  and  some minor repeating defects concerning the half moon couplers joining  machine and extensor arm. 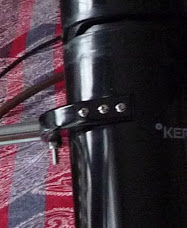 As Juan, my contact, has confirmed, the plastic coupler is a weak part. The thin junction walls holding the massive extensor arm not only carry the weight of the machine, but also buffer the kinetic energy of every single stroke which have a "kick-back" similar to that of a gun. During the last few months, I had to replace that coupler several times. They were alwas broken at the junction of coupler and extensor arm. Juan agrees that the junction point between connector and extensor arm is too weak and the whole part will have to be replaced by one of more solid material, most likely metal.

Light and/or short implements will put less strain on the junction point and the connectors will break less often. An implement should in any case weigh not more than 100g at the most and the maximum length should be around 60 cm. A combination of both should stay within these limits.

Actually, I got used to replace the couplers on my machine. Four times already. Its easily done. But these frequent changes of couplers caused another problem on the long run, because the thread holes for the six screws holding the coupler will wear out. I have a comfortable assortment of screws of all sizes, and have been improvizing. However the damage on the threads will be too severe eventually, and the machine itself will become non usable because it cannot be mounted in any way anymore.

I have to stress, that I own two spanker machines, and the problem with the couplers pops up with one of the machines only. It may well be unique with that machine. But the basic physics apply to any machine. So be cautious with the selection of implements.

By the way, I want to make a point that Juan has always been very friendly and helpful. His reaction is fast, and replacements are sent promptly. I am sure  Juan will come up with a permanent solution to the coupler problem, but it might take some time.

One year of Corona pandemy has been frustrating for us spankers. Even fully immune as I am, my playing partners are not. The small risk to be infected even if fully vaccinated, keeps us from playing. I am not complaining about Spanker Machine. I am complaining about this fuc.... situation which makes us using one.

This being said, let us make the best of SM! I am quite satisfied to have this way out of solitude into some state of mind which will make it easier to cope with being a lone spanker! Even getting used to play with SM, I have considered the time beyond Corona and the small helpful machine.

Eventually, a missing human partner will turn even a mechanical helper into something useful. I became curious about it and so have been other solo spankers. The Spanking Court will open a new session eventually, and I am thinking about a way to incorporate Spanker Machine into the proceedings. So, friends of SGH be prepared!

A Proud Member of